I’ve already written about using WS2812B RGB LEDs with the Pixel Cushion, but seeing a set of concentric circle PCBs available got me thinking. I originally used these a sort-of Superhero badge as part of a fancy-dress outfit, but they were crudely mounted onto a plastic disk with cable ties.

A bit of work with 3d software and a 3d printer produced this.

I’ve used a servo extension lead to power and control the LEDs. They’re all daisy-chained as before, starting from one of the outside LEDs and finishing on the final LED in the centre. In total, there are 61 LEDs which means that if they were run at full power, the load on the battery would be rather high (60mA per LED * 61 LEDs = 3.66 Amps). However, I’m limiting the maximum value for each LED so that they’re dimmer. An added advantage is that I can still see if I look directly at the LEDs. The overall effect is rather striking, although the camera used in the video above struggled to focus (perhaps macro might have been better) but it’s easy to see the exposure control kicking in as more LEDs are lit.

The Raspberry Pi power connections are fed directly into the GPIO connector, bypassing a somewhat delicate micro-usb port as well as ensuring that large currents for the LEDs are going to the adjacent 5v pin which is then fed out to the pixel rings.

Files for the clip-together case can be found and 3d printed from the: YouMagine Website

I suppose it would be prudent to add some sort of switch to initiate a shutdown routine, but for the moment I’ve been just pulling the plug.

Yesterday’s Raspberry Jam in Exeter gave an opportunity to briefly demonstrate Seq24 on the Raspberry Pi. I’ve got a Pi-TopCEED desktop and inside this is fitted a small amplifier and speaker. It’s a simple addition but gives me a chance to use sound without trailing wires.

Seq24 is a block-based sequencer. Patterns of notes are entered into blocks and each of these can be triggered with either the mouse or keyboard. As an experiment, I’ve entered parts of Pachelbel’s Canon in D into the blocks so that they can be cued one at a time. I’ve chosen Canon as it’s based on a repeating chord pattern of D, A, Bm, F#m, G, D, G, A over 4 bars.

Any Pi is fast enough to run Seq24 is external MIDI gear, but now that I’ve got a Pi 3 I’ve installed QSynth (which can emulate an external polyphonic sound module and uses SoundFonts) as well as AMSynth, which emulates a classic analogue synthesizer. These both seemed pretty easy to set up once I’d found a GM Sound Font for QSynth.

Cueing different parts of the Canon gives an entirely new mix which certainly adds an interesting perspective on the original music. Hopefully a YouTube clip will appear here soon! 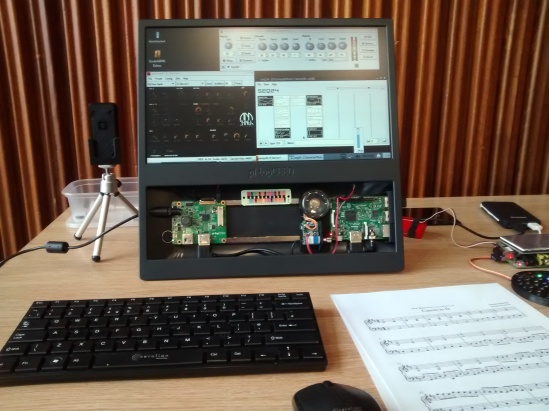